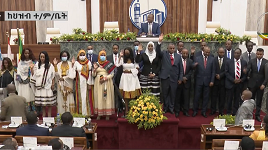 For the first time the Government of Ethiopia has appointed opposition members to serve as ministers in the new cabinet of ministers of the ruling Prosperity Party.

Justifying his decision to include opposition figures within his cabinet, Prime Minister Abiy stated that the political differences among Ethiopians “shouldn’t be an obstacle to work together”.

Before proposing the members of the new cabinet, Prime Minister Abiy indicated that he expects his new members of cabinet ministers to avoid and eliminate theft (corruption) and begging from Ethiopia.

The cabinet members are not representatives of their tribe but their country – Ethiopia. The House of Federation has representatives that represent each tribe and ethnic group, according to Prime Minister Abiy. Seven women are also included in today’s ministerial position.

The newly established Government of Ethiopia has restructured ministries by forming a total of 21 ministries. Some ministries have merged while new ministries are introduced during today’s parliamentary session. Based on the new structure, irrigation, highland areas, and regional integration, among ithers have got special attention.